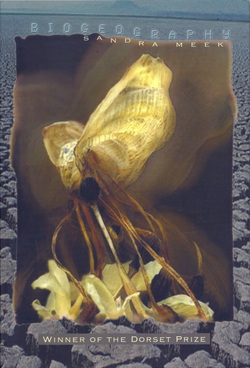 "Meek’s third poetry collection asks a lot of its readers: concentration, patience, and a willingness to go to the dictionary. In return she gives us an intelligence worth fathoming. “[T]he body’s adrift / in when, saturated bysince,” she writes. How does she know this, or that the heart has fourteen lines? We recognize the rightness of her poetry as soon as we grasp it. This beautiful and intricate book furthermore obliges us to face the reality of injustice and pain, for while Meek’s lines seem to float on the page, they are as powerful as fists."

Asheville Poetry Review review of Biogegraphy; an excerpt from "Keepers: A Review of Adcock, Meek, Kennedy, and
Blakeley," by Phebe Davidson

"Sandra Meek's Biogeography is written with urgency and verve in every line. 'I know my body will become/its own fist of blown glass, you the sweep/of light my camera first//caught of the stars,' she writes, and we are haunted by the snaking turns of past and present, the 'blindness always there//at the heart of flowering.'"
--Arthur Sze

"By the map of a turtle's neck, the staircase of a voice, the music of a small dog's nails, Sandra Meek reads the world anew, reminding us of its endlessly dynamic and divine substance. The immersion of the self, the selfhood of all living things, into the history of the landscape is the creative act that Meek performs here, an act often accompanied by the hard cold fact of human atrocity . . . . That these poems assume metaphor rather than fret to develop it gives them a deeply evolved quality--Meek achieves in two lines what a poem of old might need thirty for, and she does so with an effortlessness that smacks of magic."
--Larissa Szporluk

"Biogeography speaks to the transience of things we hope will always be with us, including ourselves. Meek touches the awful disappearance of life and its vital howling against absence. This is a remarkably tender and beautifully wise book, without blame, without sentimentalism."
--Afaa Michael Weaver