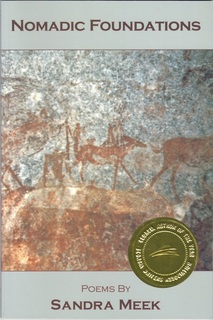 Winner of the Peace Corps Writers Award for Poetry
and the Georgia Author of the Year for Poetry, 2003

"In a poem called 'Negotiating Versions of Forever,' Sandra Meek says, 'We've been there before,' but says it with neither cynicism nor nostalgia. This may suggest the greatest virtue of this book full of virtues: the argument that we can know and love the world, even while fully aware that the world is not easily knowable nor always lovable. The language displayed here is complex, is full of allusions and serious games, like the pun on 'sin' in ' . . . back/to original sign, forsythia's golden bush igniting/that divine burn.' There is both Old Testament gravitas and new joy in this important book."
--Bin Ramke

"The landscape of Botswana, and its otherness to human understanding, is palpable in these poems . . . . The book explores and enacts (not least in its estrangements of language) the otherness of the physical and social worlds, and the ways in which they other the speaker. She neither romanticizes nor patronizes those conventionally defined 'others' who are her students, her colleagues, her friends, but instead recognizes and explores the ways in which she herself is other, not just to those around her, but to herself. Crossing borders of place and self, 'erasing/the margin of regret,' while redrawing it, Sandra Meek tells us 'The history//of the darkness of light,' making the vanishing visible."
--Reginald Shepherd

"Sandra Meek's book is dedicated to the secondary school students she taught in Botswana in 1990-1. It explores both sides of the Great Divide between the native culture and the one superficially imposed on it by the developed world . . . . Meek is even-handed. She neither judges nor praises, but the reader comes away from these often stunning poems with a broken heart."
--Maxine Kumin