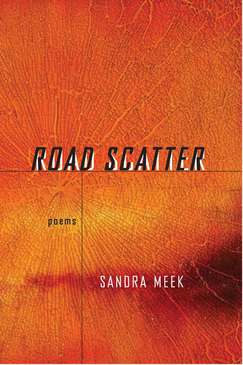 William Wright is the author of six poetry collections, most recently Night Field Anecdote and Bledsoe. Wright has most recently published work in  Shenandoah, Indiana Review, AGNI, North American Review, and others. He is  founding editor of Town Creek Poetry and series editor of The Southern Poetry Anthology. He recently won the Porter Fleming Prize in Poetry.


Sandra Meek, author of three previous  poetry collections and editor of Deep Travel: Contemporary American Poets Abroad, has created in Road Scatter a haunting work centered on  her mother’s death. However, Meek complicates the collection in her refusal to  encapsulate her sorrows to mere interiority, to contain her poetic gestures to  those of the traditional elegy. Instead, Meek’s work is paean and lament, a work  of love and sadness that draws from the world’s fragments, shards, and images to come to terms with her personal loss and loss itself. No doubt an elegy, Meek’s  book is anything but sentimental; it is mythic, dreamlike, searing. Indeed,  despite the vitally fragmented quality of Road Scatter, the book proves  coherent if kaleidoscopic, conflating the non-human natural and unnatural things of this earth with images of the body—bone, viscera, skin, hair. The tissue that  connects these fragments is always delicate, fragile, breakable: “lace,” “string,” “yarn,” and things “diaphanous.”

The result is a book of meticulous  craftsmanship in which the poet merges, attempts to piece together carefully, or at least acknowledges the impossibility of doing so. However, Meek’s painstaking  gestures do not prevent moments of bald vulnerability. For example, in “Shadow  Protrait,” the book’s opening poem, Meek establishes a tone both clear and  delicate:

the last comma of her hair, the few
grayed leaves left tagging
the walking stick bush a spider has spanned
with dawn silver, cursive stringing

letter to letter in quartertone slide.

Already the poet melds the human, plant, and animal worlds, the very light of December’s “threads” brittle, though through “cursive” and “letter” language is beginning to manifest. Meek goes on to intensify this conflation of delicacy, beauty, and vulnerability:

The body is a jar of air and lace;
the heart, a ruby beaker a hummingbird sips
all summer from.

away from my hand’s small pressure
stroking her hand, spilling back
like grape juice down a straw
a child plays, not
drinking--

Her room’s fluorescence
bays the dark beyond
the doorknob she could turn
once, when constellations glittered
until she clicked them
off behind blinds underscoring
the night she no longer

The speaker recognizes the “hollowing brow” of her mother, a moving image, but the poem becomes strangely hopeful: Meek’s urgent portrayal of the body’s vulnerability and her own keen and vulnerable perception of how the “shrinking bone” of her mother’s body—now cordoned off into a small, antiseptic space—somehow amplifies the universal rather than denying it.

“Round Trip,” another poem early in the collection, begins with an almost Hopkins-like wordplay:

Enough, these weekend drives, to hold to the distant
approaching hill, wild-

Here Meek demonstrates how exterior and interior worlds merge: The “winter-shed” trees, the “cell tower,” and the “aspirant drop of light,” all artifacts of the outer world, prove imagistic analogues for chemotherapy, how the body is wintered by that which attempts to heal it, how the cells depend upon a tower with a “drop of light,” the medicine feeding the veins. The poet does not flinch: She likens the failing, half-hovering “get-well-soon” Mylar balloon in her mother’s hospital room to the “raisiny deflation I never knew the lungs’ alveoli / could rubber to.” The poem culminates with recognition of the suffering:

of morphine toward the knot of
misfiring cells and my waiting

to hear her, somehow, after days
of her voice, whirring ever deeper into her

This suffering is not limited to the visceral body, but even to that which is intended to remain, as in “Marble Figure, Descending Panorama”:

wears, the hill
going down--
weighted with rain, her

The body
is equal measures

milk and stone, a small room

divided by string. The sky’s
acid what tongues

her face to blur--

All parts of this world, even a marble statue, become undone, “fractured,” “that illusion / descending.”

In “Chemo Session Six,” Meek merges the celestial with the ailing body, and the cycles of the former are not necessarily anodyne for the latter. Rather, the celestial shapes she perceives reinforce the inevitable for the poet, as

across winter’s bronze face. Sky
is what orbits, sun what stains

the window span with its comet tail
of abandonment: ice so shattered

we swear it fire.

In “Extinction,” time becomes vulture: “Fainter breath. Migrating air. / Sweet meat of the world / Picked clean,” and in “Spreading Ash,” the poet’s mother “is a gray arc shimmering / between pines, a winter breath / at summer’s end, a small packet / of flung ash,” until later the poet remarks that “autumn’s ashen light / [is] all that’s ghosting my hands.” Despite the heavy subject matter, however, and while Meek does not turn away from the cruelty of illness, the book’s assemblage of the world’s myriad things—lemons, spines, pebbles, engines, green birds, streetlamps, and more—transforms the work into a rich journey through grief.

In “Road Scatter,” the title poem that appears near the end of the collection, the opening lines serve as a fitting micro-narrative indicative of the entire book:

A single vibration breaks the story
to the crystal remnants

While the book strikes and shatters, freighted with lamentation and loss, the ways in which Meek render the poems—delicate, fragmented, coherent, and stark—create dark harmonies, minor chords that linger.

Difficulties intrinsic to a book as complex as Road Scatter are crucial, rewarding to the careful reader, for here  the poet admits that sorrow need not be myopic. Meek strikes outward and inward  simultaneously, assimilating fragments—elements of the psyche, the body, and images of the earth—to craft a crystalline, sharp, lucid work, one that loves the world for its myriad things but resents it, too, for how its scatters the fragments of her mother, memories of her mother, and memory itself, impossible to gather and make whole again.