You could walk under it your whole life
and never know it flowers, magnolia’s waxy moons
eclipsing the blooms, never know
it houses chiggers, red flecks

over block letters in stone.
Don’t we want to believe in living
without the machinery of life,
holding our breath through eternity

at the bottom of the pool,
unending time to make over each flailing
fluid gesture to sign language’s
precise fluency? Science the art

of elaborate misnaming, it’s not a moss
but an herb, related to the pineapple, as Irish moss
is an alga, reindeer moss a lichen, and the air fern’s
not a plant at all but an oceanic skeleton,

dyed green. What we make
in the image of this world, is it art
or description’s drapery: Christmas tinsel stripped
of silver to essence, shredded

copperish paper; not a sachet of hair
rescued from a lost beloved’s
ivory brush, its unraveling
nest’s composed of a single

living thread which in the end
kills nothing--not a parasite, but merely
a plant living on air, so weightless it resists
gravity, the curious hand’s

loving destruction. The ephemeral’s
part of the illusion, part of nature’s art
beyond our dreamed-up uses--packing material,
upholstery stuffing, the fertility doll’s

approximate flesh winding the flowering skirt’s
hidden stem: a muse for artifice, its soft
embellished spine. Each loop
leads through the next, a wad of ancient

fishing line marooned in these trees during some
archetypal flood. How easily the moment walking beneath
ravels into forever, the way this sidewalk followed
far enough would end in ocean--coral reefs’ 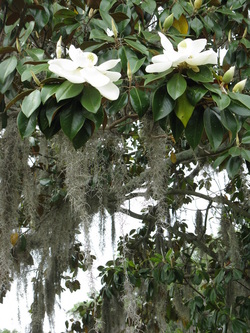 For a photo album of Tillandsia Usneiodes (Spanish Moss)
and the cemeteries of Savannah, Georgia, click here: